Fifty prominent Australians, mainly Queenslanders, have signed an open letter calling on Queensland political parties to commit to uphold a set of accountability and transparency principles if elected. 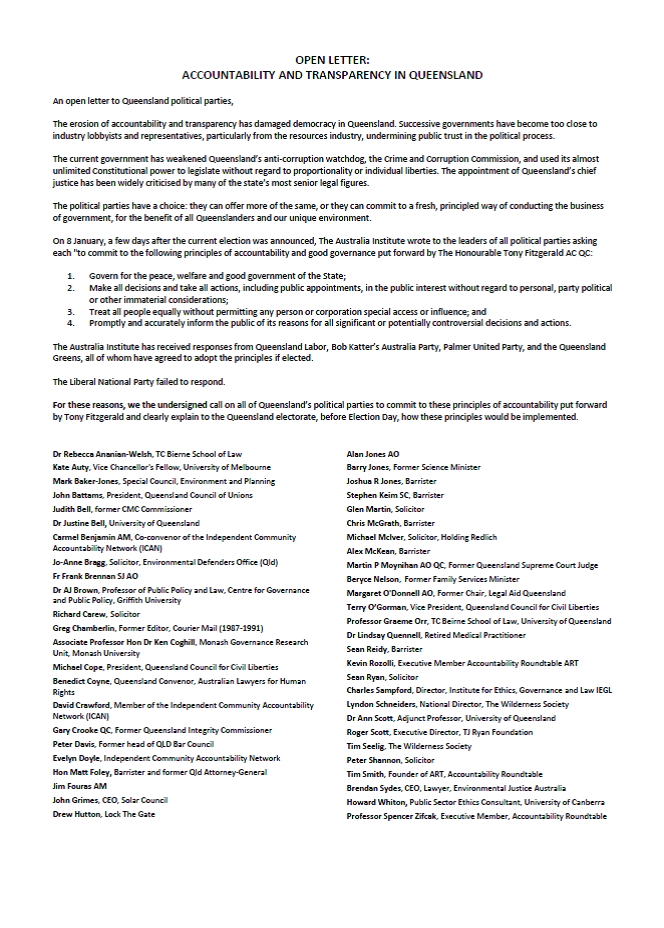 The signatories include dozens of prominent Queenslanders and other Australians -- including barristers, a former Corruption and Misconduct Commissioner, social justice and environment organisations, Alan Jones and the former editor of the Courier Mail.  They are all concerned about the erosion of accountability, transparency and good governance under successive Queensland Governments.

The principles were drawn up in consultation with preeminent corruption fighter the Hon. Tony Fitzgerald AC, QC in response to the erosion of accountability and transparency safeguards overseen by successive Queensland governments.​

Will you add your name to the list of people calling for ALL QLD political parties to publicly commit to implementing the Fitzgerald Principles, if elected?

The Australia Institute has received responses from Queensland Labor, Bob Katter’s Australia Party, Palmer United Party, and the Queensland Greens, all of whom have agreed to act in accordance with the principles if elected. Full responses here.

The Liberal National Party has so far failed to respond.

Transparency and accountability are essential to a healthy democracy and research indicates that corruption hinders growth, increases the cost of doing business, and lowers the quality of public infrastructure.

Over successive governments, transparency and accountability concerns include:

The erosion of accountability and transparency has damaged democracy in Queensland. Successive governments have become too close to industry lobbyists and representatives, particularly from the resources industry, undermining public trust in the political process.

The current government has weakened Queensland’s anti-corruption watchdog, the Crime and Corruption Commission, and used its almost unlimited Constitutional power to legislate without regard to proportionality or individual liberties. The appointment of Queensland’s chief justice has been widely criticised by many of the state’s most senior legal figures.

Transparency and accountability are essential for a healthy democracy and research shows corruption inhibits growth, increases the cost of business and lowers the quality of public infrastructure.

For these reasons, we the undersigned join the call for ALL of Queensland’s political parties to commit to these principles of accountability put forward by prominent anti-corruption figure Tony Fitzgerald AC QC and clearly explain to the Queensland electorate, before Election Day, how these principles would be implemented if elected: