In memory of Anne Kantor AO, her family has asked, in lieu of flowers, for donations to support the Anne Kantor Fellowship progam at the Australia Institute. 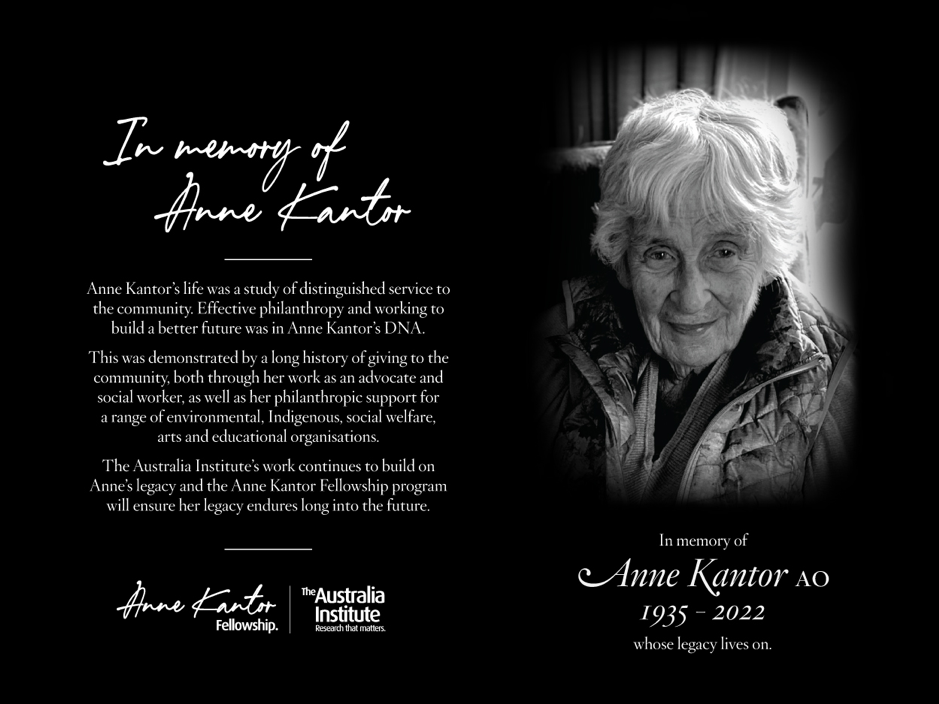 In memory of Anne Kantor AO

Anne Kantor's life was a study of distinguished service to the community. Effective philanthropy and working to build a better future was in Anne's DNA.

This was demonstrated by a long history of giving to the community both through her work as an advocate and social worker, as well as her philanthropic support for a range of environmental, Indigenous, social justice, arts and educational organisations.

The Australia Institute’s work continues to build on Anne’s legacy and the Anne Kantor Fellowship program will ensure her legacy endures long into the future.

About the Anne Kantor Fellowship

The Anne Kantor Fellowship is a unique program providing paid on-the-job training, at the Australia Institute and partner organisations, to equip and encourage new voices in Australia's future policy and democratic debates.

About the Australia Institute

The Australia Institute is one of the country's most influential public policy think-tanks. Based in Canberra, we conduct research on a broad range of economic, social, transparency, climate, energy and environmental issues in order to inform public debate and bring greater accountability to the democratic process.

Anne and the Kantor family have been strong and vital supporters of the Australia Institute since it began more than 25 years ago.

The Australia Institute has a high impact range of initiatives to improve and strengthen our democracy and to help fix politics in Australia.

It is because of people like you that makes any of this work possible.

Every donation of at least $2 is tax deductible.

I prefer donating using my PayPal account or by bank transfer or over the phone.

By leaving a gift in your Will, you can create a better Australia.

If you are a monthly donor, you can update your card details, change donation amount or cancel donations in the supporter portal.