This is an open letter from early in 2015 . The minister responsible has changed, but you can still sign the petition to indicate your support for the Buffett Rule.

55 Australians earned more than a million dollars but paid no income tax in 2012-13.

A Buffett Rule is a simple fair way to stop this from happening. It's a way to make the system work like it's supposed to.

Research by The Australia Institute, commissioned by GetUp!, shows that implementing a Buffett Rule for the top 1% of income earners in Australia would raise $2.5 billion in revenue each year. It would ensure the wealthiest Australians pay their fair share of tax (a minimum 35%) by making tax loopholes worth less.

The Labor Party adopted a Buffett Rule at its national conference at the urging of the Community and Public Sector Union (CPSU). Then The Australian backed in an editorial. Even Treasurer Joe Hockey has said he is considering a Buffett Rule, based on The Australia Institute's research.

"Treasurer Joe Hockey says he'll consider Labor's "Buffett rule" proposal, which would set a minimum tax rate of 35¢ in the dollar for anybody earning over $300,000" - Australian Financial Review, 27 July

That's the power of a good idea. That's why we took out a full page ad in The Saturday paper.

Let's show the Treasurer that Australians back tax reform, as long as it's fair. Add your name to the petition! 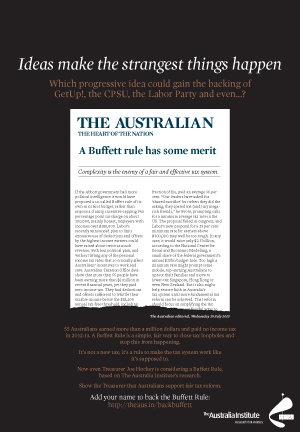 We, the undersigned, back the Buffett Rule for Australia.

You have said that you're 'happy to look at' the Buffett Rule. Setting a minimum tax rate for Australia's wealthiest 1% of income earners would ensure that CEOs don't effectively pay less income tax than their employees. Research by The Australia Institute shows it would raise an estimated $2.5 billion a year in revenue.

The tax system only works if everyone is paying their fair share.

If you're serious about tax reform, start with the Buffett Rule.