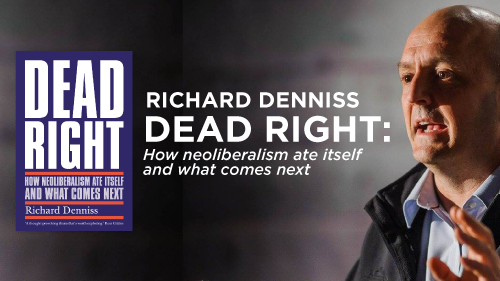 Join Richard Denniss, 6 pm Tuesday 7th May at The Kings Head Pub for the next stop of Richard's Dead Right; How Neoliberalism ate itself and what comes next book tour.

In Dead Right, Richard expands on his ground-breaking Quarterly Essay, exploring ideas around what Neoliberalism has done to Australia.

For decades, we have been led to believe that the private sector does everything better, that governments can’t afford to provide the high-quality services they once did, but that security and prosperity for all are just around the corner.

In fact, Australians are now less equal, millions of workers have no sick leave or paid holidays, and housing is unaffordable for many. Deregulation, privatisation and trickle-down economics have, we are told, delivered us twenty-seven years of economic growth ... but to what end?

You can purchase your own copy of Richard's book, Dead Right: How Neoliberalism at itself and what comes next, on the night from Fullers bookseller.

We hope you join us for a night of insightful conversation and the opportunity for the full scoop on what’s inside Dead Right.