>>> EVENT TO BE RESCHEDULED
WE WOULD LIKE TO APOLOGISE, DUE TO CIRCUMSTANCES OUTSIDE OUR CONTROL WE HAVE HAD TO RESCHEDULE THIS EVENT. PLEASE STAY TUNED AS A NEW DATE WILL BE ANNOUNCED SOON.

“Economics is like a tyre lever: it can be used to solve a problem, or to beat someone over the head” -- Richard Denniss

Join us for Politics in the Pub with Richard Denniss, author of Econobabble: How to Decode Political Spin and Economic Nonsense. 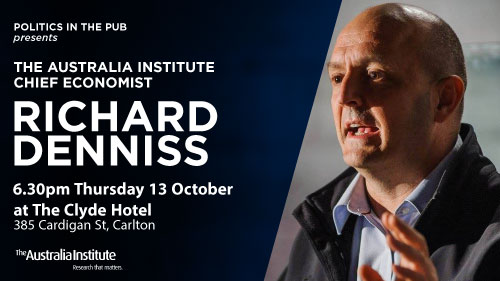 Richard has published extensively in academic journals, has a fortnightly column in The Canberra Times and Australian Financial Review and was the co-author of Minority Policy: Rethinking governance when parliament matters (with Dr Brenton Prosser), the best selling Affluenza (with Dr Clive Hamilton) and An Introduction to Australian Public Policy: Theory and Practice (with Dr Sarah Maddison).

His most recent book Econobabble was released in February 2016.