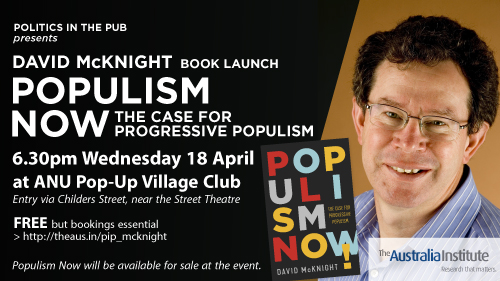 Join us for Politics in the Pub with David McKnight, to launch his new book Populism Now: The case for progressive populism.

Populism is a dirty word thanks to Donald Trump and Brexit. But rather than associating it with demagoguery and exclusion, can it be a positive force? Might there be a progressive version of populism that can thrive in these difficult times? This timely and persuasive book argues right-wing populism is a backlash against free market globalisation. This book exposes the failures of globalisation: the greedy banks, the predatory privatisations, corporate tax avoidance and the underclass of temporary overseas workers.

By contrast, progressive populism can answer the economic grievances of ordinary people and avoid fuelling the demonisation of ethnic and religious minorities. In a world that is charged with hate-filled language as people look for someone else to blame, the case for progressive populism must be heard. This important book helps give it a voice.

“A compelling expose of neoliberalism and its link to Trump-style populism. A timely and lively read.”
— Richard Denniss, Chief Economist, The Australia Institute.

DAVID McKNIGHT is a well-known journalist, writer and academic. An Honorary Associate Professor at the University of New South Wales, in Sydney, Australia, his books include, Rupert Murdoch: an investigation of political power (published in the UK as Murdoch’s Politics), as well as Big Coal (co-author) and Beyond Right and Left which discusses renewal of the progressive political vision. He has also written on political surveillance during the cold war in Australia Spies and their Secrets and on Soviet intelligence in Espionage and the Roots of the Cold War.