We need to reclaim an economic debate that is broken.

Australia’s economy is stagnant, wages growth is the slowest it's been since World War II, interest rates are lower than ever before and the current economic debate still prioritises a surplus over sound economic management.

A big part of what has gone wrong with our political debate comes from a poor economic debate. A debate that is stuck in the past.

Reducing inequality should be part of any growth strategy

Inequality slows economies growth, reducing incomes and reducing employment. Reducing inequality helps to grow an economy and should be part of any government’s growth strategy. By addressing inequality, the government can not only improve the lives of those at the margins, they can also increase incomes and jobs.

When we look at all the countries around the world, we see that those countries that have higher levels of taxation are more likely to have higher average incomes. Higher levels of taxation are also correlated with other measures of wellbeing like life expectancy, the Human Development Index and Happiness. Despite this we’re told by governments that higher taxation would be a wet blanket on the economy and would reduce economic growth.

If Australia wants to increase its wellbeing it should be looking to nations that have higher average incomes, higher Human Development scores, higher life expectancies and who are happier. These countries almost universally have higher levels of taxation.

Too often our governments become obsessed with running a budget surplus. A surplus is when the government takes from people more in tax than it gives back in spending. Surpluses do play a role in economic management. Surpluses supress economic growth and are useful during boom times to limit the damage done by inflationary pressures and speculation. Australia’s economy is seeing economic growth slowing, real wages falling and businesses struggling. This is exactly the wrong time to commit to running a surplus.

In the perfect world of neo-classical economics real wages rise with productivity. Productivity is increased output with the same inputs. If productivity is rising, then workers are producing more with the same amount of work. This increase in output in the perfectly competitive world of neo-classical economics should flow back to workers in the form of higher real wages.

This theory is used to reject workers claims to higher wages. You regularly hear business groups and governments say that wages should be linked to increases in productivity. The real world doesn’t work like that as this graph from a Centre for Future Work report shows. Productivity has run way ahead of real wages since 1985. 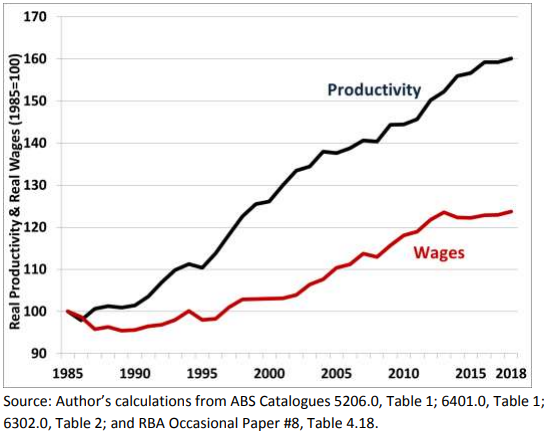 There is no automatic link between productivity growth and real wages growth. In the real-world firms have market power and can simply pocket increases in productivity in the form of higher profits.

Unemployment is used to control inflation

Not many people know this, but the Government targets an unemployment rate of 5% (currently equivalent to 726,100 unemployed). This is a rate of unemployment that the Government thinks is ‘full employment.’ It bases this theory on a particular stream of economic thinking that is very controversial among economists.

While the boffins that pull the economic leavers are targeting 5 per cent unemployment their political masters tell us it’s the fault of the unemployed who take drugs and are not serious about finding work. This false portrait of the unemployed helps to avoid coming clean about what is really going on with unemployed workers used as the unwilling conscripts in the fight against inflation.

The constant chant over the last 30 to 40 years is that privatisation and deregulation are a way of growing the economy and creating jobs. We’re now seeing the results of this zeal and they’re not what many had promised. No less than the head of the ACCC had said that privatisation has created unregulated monopolies that are hurting productivity and damaging the economy.

Australia Institute research shows that privatisation of the electricity sector lead to higher prices, a much larger proportion of people employed in management and marketing and a smaller proportion spent on people who are actually working on the electricity assets like linesmen.

It is also interesting to look at some of the sectors that have been deregulated including banking, water, aged care, disability services and building inspection. All these sectors have had damming findings from Royal Commissions or are currently hearing shocking evidence before a royal commission or there are calls for a Royal Commission. Regulations are designed to protect vulnerable consumers from profit focused businesses. In many cases deregulation just allowed unscrupulous firms to profit gouge these vulnerable consumers.

As part of our program we are embarking on a national speaking tour featuring our chief economist Richard Denniss.