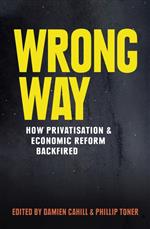 Since the 1980s, successive waves of ‘economic reform’ have radically changed the Australian economy. We have seen privatisation, deregulation, marketisation, and the contracting out of government services such as transport and education.

The benefits of economic reform are increasingly being questioned. Alongside growing voter disenchantment, new voices argue that instead of free markets, economic reform has led to unaccountable oligopolies, increased prices, reduced productivity and a degraded sense of the public good.

In Wrong Way, Australia’s leading economists and public intellectuals look at key economic reforms, including child care, aged care, housing, banking, prisons, universities and the NBN. Have these reforms for the Australian community and its economy been worthwhile? Have they given us a better society, as promised?

The book will be available for purchase at the launch.